On January 26, 2011, I found myself sitting at my desk for over an hour, trying not to stare at the phone. What is it they say? “A watched pot never boils?” I had told them to call me between 11:00 and 12:30 since that was my off-hour. I told them they HAD to call me during that time, as that was the ONLY time all day I wasn’t with kids.

They promised they would call me.

By 12:15, I still hadn’t received the call – and I really, REALLY had to go to the bathroom. Really! But I WOULD NOT leave my seat until that phone rang. At 12:28, my phone rang and the caller ID indicated this was the call for which I’d been waiting. At 12:32, I called my husband while simultaneously hitting “Send” on an email that had been sitting in my draft folder all day; the email was to a few close friends who had also been awaiting the call. The email simply read, “1 Samuel 1:27.” The phone call to my husband was just as short and sweet, mostly because my 6th hour class was filing in the room.

The road to that day – that moment – was 10 years in the making: and let me tell you … every second that we waited, every tear that we shed (and there were millions), every prayer that we said was worth it. And then some.

I have written and rewritten our story in my head a thousand times over. There is SO much to share.

Infertility is … heartbreaking. Life-altering. Painful. Lonely. And until it has happened to you, you have no idea the depths these emotions can reach.

Our infertility journey began 12 years ago. After a few months of trying to get pregnant on our own, I pushed my doctor to move forward with some testing. Call it instinct, intuition, whatever … I KNEW something wasn’t right. And it wasn’t.

Although many of our tests came back “inconclusive,” we were told that we would probably have a very difficult time getting pregnant on our own. We had the perfect storm of minor issues – things that alone wouldn’t be much of a problem, but combined would equal reproductive disaster.

As is my nature, I hit the internet. I researched. I read blogs. I bought special bread. I changed my diet. I became obsessed – and along with that, unbearable and depressed.

Suddenly, everyone I knew was pregnant. Every day, the mailman brought me another baby shower invitation or birth announcement. Everywhere I looked … pregnant women. Amidst all of this, we had tried two rounds of IUI (intrauterine insemination), both of which were unsuccessful. At this point, we decided to give it a break. I know my poor husband was lost as to how to help me, all the while dealing with his own emotions and frustrations about our situation. Infertility takes its toll on a marriage; even the best and strongest marriages are not safe from its wrath.

I hate to say it, but I gave up. I don’t know if my husband gave up, too, because we just stopped talking about it. We went on with our lives … our marriage … but we stopped talking about having kids. For me, I just resigned myself to the fact that we would not have children. I sought counseling to deal with the grief. I will never forget one counseling session in particular … I was sharing with my therapist that I felt we would likely be a childless couple; she told me “I didn’t want it badly enough.”

I never went back.

A couple of years went by. We “embraced” being childless. We ate out … a lot, we went on vacations, we slept in, we spent entire weekends on the couch watching movies. And then one spring day, as I was wandering through US Toy in search of decorations for our upcoming STUCO mixer, my husband called me.

“Are you sitting down?” he asked.

“Do you remember last year when I told you about Tom and his wife?” he asked me.

“Sure.” (This is what I say when the answer is really “no,” but I don’t want to argue about why I don’t remember something a year after the fact.)

The conversation continued, and this is what he shared: a year earlier, my husband had been on a road trip with a coaching colleague and his wife. As they didn’t know each other well, the conversation turned to us and why we didn’t have children. Almost a year (to the day) later, that same coaching colleague and his wife approached my husband and shared with him that they had thought about us often and prayed about us over the course of the last year – that God had placed it on their hearts to help us. They vowed to do “whatever it takes” to help us become parents. They offered spiritual, emotional, and financial support for our journey to become parents. When we had all but given up on ourselves, God’s plan for our family had been in the works all along.

The remainder of our journey was not without more tears, setbacks, and frustration. I learned how to give myself shots … lots of shots. We endured two canceled rounds of IVF (in vitro fertilization) while all the drugs that come with IVF left me feeling …well, just UGH for the better part of 5 months.

Although our first 2 rounds of IVF had been canceled and our chances at a successful third round weren’t looking too promising, we decided to just go for it and see what happened. What happened was nothing short of a miracle. We went into an egg retrieval HOPING for 4 or 5 eggs. We got 9. NINE! Our doctor literally high-fived me in the recovery room. Four days later, four of our “children” had survived the entire process and were ready for a chance at life.

In a small room, feet in stirrups, eyes on a video monitor, we watched and prayed as 2 tiny embryos were implanted. Weeks later, we watched a different video monitor and prayed for 2 tiny (but strong) heartbeats – and they were there. Finally, we had our happy ending. Yes, we still had months of pregnancy to endure and were not naïve to any number of things that could go wrong – but in that moment … all the world seemed to stand still while the possibility of our future was displayed there on that video monitor.

We were going to be parents. 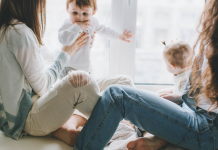 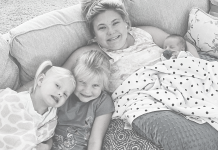 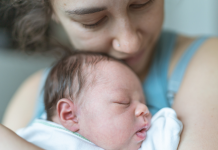