I was having a conversation the other day with two co-workers who also have daughters. The topic turned to parenting and how we can teach kindness. It then morphed into a discussion about how we grew up and how that affects what kind of moms we are.

I began sharing a current concern of mine about how to address weight. I was fortunate to grow up with relatively no worries about weight. I just don’t remember it being a big deal. It probably was, at one time or another. I definitely went through stages where I was heavier at times and thinner at others. But I never remember it being a “thing” that caused me any major concern. So I, in turn, want to work to ensure that weight is also not a big deal to my daughters. I want them to focus on being healthy and active. That is basically it at this stage in their lives. I do not want the number on the scale or a certain pant size to be a goal. I want running a 10-minute mile to be a goal. Or being able to climb to the top of the rock wall. Or doing 20 push-ups. Whatever.

But back to my current concern. I am struggling with how to explain why we don’t talk about other people’s weight. It’s completely acceptable to comment on all kinds of other physical traits like height, hair color, and things like that. But weight is off-limits. And trust me, I don’t want people commenting about what they think about MY weight. I have currently settled on explaining that everyone looks different and that’s cool. If we all looked the same, that would be boring. We should embrace and love our bodies, no matter what they look like. I followed up with why we should ALWAYS be focusing on the person’s personality and not what they look like. How you treat people is important. What you look like is not.

As I was having this “major life moment” talk, that I’m sure they won’t remember, I realized how much having daughters has helped my self-esteem. As I mentioned earlier, I am very lucky to have grown up with parents who did not place importance or significance on what I look like. They placed a lot of emphasis on working hard, having respect, being kind to everyone, and never treating anyone different because of a whole range of things including your skin color, how much money you do or do not have, what your job is, etc. Those life lessons stuck with me, and I tirelessly try to pass those along to my daughters. 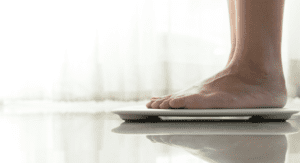 After our weight conversation, I suddenly realized that I never say anything aloud about my weight in front of my daughters. At first, it felt like a bit of an effort from time to time to not ask if I looked fat in something, or to make a side comment that I felt like a whale. Now, the thought of me saying comments like that aloud almost grosses me out. Why would I say that about myself? Aren’t there bigger fish to fry than something as minor as MY weight? It would crush me if I heard my daughters making similar comments about themselves.

I have been working so hard to try to set the foundation for them, and I now realize how much it has helped me in return. I no longer weigh myself daily. If I am trying to make a change, I am doing it to be healthy and not to get to a certain size or number on the scale. I’ve long been aware that my daughters have made me a better person, but I never thought about what they’ve done for helping me cut out the vocal, negative comments about my weight. I hope they take what I say (and don’t say) seriously and are able to focus on feeling strong, instead of on a silly number on a scale.