I was living a textbook life. I was raised in a conservative church, met my husband in the youth group and married him at 19. I finished my education degree and spent several years surviving the world of teaching while changing the lives of my students. I cried my way through fertility treatments and cried again when they placed that perfect baby boy in my arms. Life, for the most part, was as simple and predictable as I imagined it would be.

I dropped to part-time teaching after the birth of my son; my life revolved around him. My identity became rooted more and more in motherhood and less and less in my marriage and career. I dedicated every ounce of energy I had to bringing my sweet boy new experiences while he was awake, and I researched every facet of parenthood I could while he was asleep.

Then … it all changed. My slow moving, stable life was gone. Divorce shattered the only plan I’d ever known. I was shaken to my core, and my reaction to it all was to seek adventure and independence. I suddenly craved an identity of my own, one I’d never had the chance to build.

And let me tell you: I have had quite the year finding it.

I kissed a stranger in Ocean City, ran through a subway station in DC, and had a girls’ weekend in Bethany Beach.

I discussed French poetry with strangers in a downtown KC loft, attended a Roller Derby, and got a tattoo on a whim.

I ate cow’s stomach and cactus, and finally learned to like beer.

I prayed with an Uber driver, got stung by a jellyfish, and jumped out of a plane at 14,000 feet.

I rode a horse on the beach in Padre Island and the thrill rides on top of the Stratosphere in Vegas.

I wrote for a national blog and had my photos published in a local magazine.

I relaxed on the beaches of Aruba, played steel drums at a beachside bar, and paddleboarded in the Bahamas.

I took an airboat tour of the Everglades, held an alligator, and watched the sun rise from the deck of a cruiseship.

I sang karaoke at an Ozarks bar in the middle-of-nowhere and crawled out on a 20-ft high tree branch, dropping into the river below in exchange for a swig of moonshine.

I learned how to rock climb and how to kickbox.

I rode a mechanical bull, rollerbladed on ramps in a skate park, and kayaked in Branson. 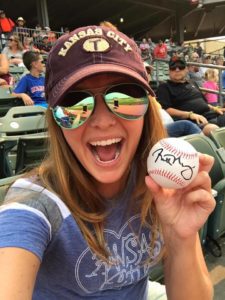 I was on the Jumbotron at Arrowhead, I got Bill Murray’s autograph, and I made friends with contestants from American Ninja Warrior.

I made it over the 12-foot Warped Wall and successfully completed a Salmon Ladder transfer.

I learned to one-step and two-step, and I received applause on the dance floor for doing swing stunts, lifts, and aerials.

I serial dated: I’ve been on dates with both a felon and his supervising deputy. I’ve had Saturday night drinks with a pastor and Sunday lunch with a rapper. I’ve been out with someone more than a decade younger than me and another almost a decade older.

I’ve broken someone’s heart. I’ve fallen in love, and I’ve had my own heart broken.

It’s been a bucket list kind of year. And it sounds amazing, right!? It really has been. I wouldn’t change this period of growth. I’m grateful for the experiences I’ve had, for the memories I’ve made, and for the lessons I’ve learned. However, I will admit to another list, one that’s been growing right along with the fun one:

I have spent more time sleeping in after late nights and less time at church.

I have hired more babysitters and read less bedtime stories.

I drink more and cook less.

I am on my phone more and engaged in present moments less.

I have spent more time on adventures and less time maintaining my health.

I am focused more on me and less on others.

This quest for new experiences, the thirst for independence, and the journey to find my own identity … I suppose it temporarily shifted my focus. Life became more about me as an individual, and less about me as a mother. And I realized something important because of that shift:

Finding my identity in motherhood makes me a better version of myself. It keeps me grounded. It helps me maintain focus on what matters.

I do plan on continuing to treat myself to a massage once a month. I will continue training at a ninja warrior gym. I will take the opportunity to two-step at a country bar whenever I can. I will always be up for trying something new. I’m not the same person I was, and I love the person I’ve found. She is lighthearted, brave, and confident. She is spontaneous. And her joyful zest for life is contagious.

It might be time to find more balance in this time of discovery. I know that finding myself will have a positive impact on my son and on our relationship, but I also know that the adventures he and I have together will be the ones that will mean the most in the long run. I am realizing that the growth I seek will be found in faith and family. And I will continue to remind myself that the most important thing on my bucket list has already been accomplished: Becoming a mom.

To the Father I Had. Then, Didn’t

The Significance of the Hyphen to a Single Mom

Settling Into Myself Without Having to Settle