When most kids go back to school shopping at 5 years old, they’re either bored by the whole experience or they focus solely on what kind of backpack they want to buy. Brooklyn Stewart wasn’t a typical 5 year old.

The now-10-year-old girl was shopping for back to school supplies a few years ago, when she had an idea. “I like school supply shopping! I don’t know if other kids do, but I really do,” laughs the St. Elizabeth’s fifth grader. “But I realized some kids don’t have this kind of access to all the school supplies they need. So I decided to help. I just wanted to do something for the community.”

“We give them to the Salvation Army so the kids who don’t have the supplies to go to school that year can have a good school year,” she says proudly.

It began in 2013. Brooklyn’s mother, Amanda Stewart, said when her daughter got the idea for the backpacks, they say down and did some research.

“She wanted to do a project to help,” said Stewart. “ We got online together and saw that Salvation Army was partnered with KCTV5 that year for an S.O.S — “Supply Our Students” — drive. We got 17 backpacks that year to give to the drive.”

The second year they collected 24, but it’s grown immensely. “Our goal this year was 350, but we crushed that by about 50 backpacks,” Brooklyn says proudly.

Since that first year, she has collected a total of 950 backpacks, which helped 950 kids over the years. “I want the kids to not have to worry about school supplies. It’s something they won’t have to think about,” she says.

It takes a lot of planning and coordination to make backpack drive successful. It starts when Stewart puts up a Go Fund Me page for donations beginning in June. During that month, she and Brooklyn keep track of the donations and get the word out about the actual day of the actual backpack drive, which Stewart says is usually late July or early August before the first full day of school. It even includes a lemonade stand, which Brooklyn takes care of while friends and family help out inside their house.

“We recruit volunteers and set up and assembly line,” says Stewart. “While she’s outside manning the lemonade stand taking donations and greeting people, we have people inside taking a backpack and going through the line filling it with all the supplies. Our whole house is completely full of backpacks by the time we’re done, and it’s so worth it.”

Once the backpacks are put together, a Salvation Army truck comes by and brings the items to family shelters across the Metro for distribution.

Every year the event gets bigger. Brooklyn says last year they had eight shopping carts overflowing with backpacks, books, notebooks, pens, pencils and other supplies. That’s her favorite part.

“I like going shopping for stuff mostly because I get to push a cart. I think it’s really fun to just go shopping and buy the supplies.” 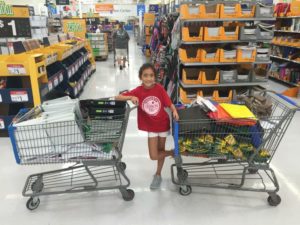 When it comes to picking out those supplies, Brooklyn definitely has a system down. She usually chooses 20 girls and 20 boys, but doesn’t choose just any backpack.

“I focus mostly on patterns,” she says. “We usually don’t get themed ones from movies or tv shows until after we’ve bought out most of their patterned supplies. I think those are a lot more subjective to one group and that means less kids might be willing to wear the backpack. I don’t want to choose backpacks for kids if they’re not going to like it.”

Brooklyn has no plans to stop, and will keep doing this “as long as it keeps working and we keep getting backpacks.” 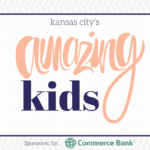 Do you know an amazing kid who deserve recognition for their invention, entrepreneurship, volunteerism or advocacy work? Let us know at info {at} kansascitymomsblog.com