I have three kids. I can officially say that I have a first, middle and youngest child. The mothering I do for my 1-year-old today is completely different than the mothering I did when my 8.5-year-old was 1. I’m older, have experiences that have put behavior into perspective, I don’t freak out over the little things. My oldest definitely got the brunt of my new parent experimentation, and my youngest is getting a more relaxed version of my parenting self. Their birth order certainly has a role in how I have interacted with them, as they developed into little humans with big personalities.

I am the middle child of three. I have a sister 9.5 years older than me, but when I take this (rather silly) birth order quiz, I have the profile of an oldest, first-born child.

All you have to do to know what your child’s personality will be like when she’s older is Google “birth order.” There’s a wealth of articles and books citing research about the importance of birth order in determining personality, career choice, the way we behave with romantic partners and friendships, how we parent, how we think, what motivates us. I kind of think there’s some silliness to all that. 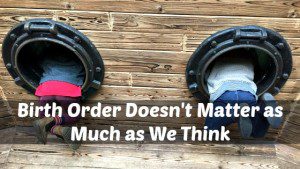 I think it’s less about the legalistic order of birth and more about whether parents are relaxed or anxious. While we look for definitive ways to explain and categorize the mystery of personality development, it’s just not that simple. Birth order may be one factor in a complex web of epigenetics (how genes are expressed in an environment), but more important is the attunement or disconnection I have as a parent to each child’s unique position in the family.

Take my middle child for example. Jude was the youngest child (of 2) for 6 years before becoming an older sibling to two younger brothers in the same year in our blended family – I birthed our youngest child, and Jude’s stepmother birthed a child as well. But Jude went through all of early childhood (0-5 years) as a youngest child. Does that make him psychologically a youngest? Is he the second of three in two different family constellations? Is he the second of four because in his mind he has three siblings? Is he an “older” child because of the large gap between him and his younger brothers? Jude’s older sister is only 16 months his senior, making them nearly Irish twins. Does that shape him more as a twin or an older sibling? Or perhaps because of all these questions, we could simply say that he’s the quintessential middle child?

This is the difference between “actual” birth order (ABO) and “perceived” birth order (PBO), described by the original birth order theorist Alfred Adler (a somewhat disciple of Freud). But the problem with PBO is that perception shifts based on circumstances, environment and relational interactions. In our postmodern society, we have foster and adoptive children, blended families, families within families (like twins), gap children (when there’s a large age gap between siblings). Simple birth order theory can’t be applied. Perhaps, more than any other component of birth order theory, the single most important determinant of when birth order matters is whether a child’s parent thinks it matters – because that influences a parent’s behavior toward a child.

In October 2015, a new study was published that described a multilevel investigation of an international pool of 20,000+ subjects. This is what they concluded:

Most important, however, we consistently found no birth-order effects on extraversion, emotional stability, agreeableness, conscientiousness, or imagination. On the basis of the high statistical power and the consistent results across samples and analytical designs, we must conclude that birth order does not have a lasting effect on broad personality traits [emphasis mine] outside of the intellectual domain.

But you know what does have an effect on personality development? Attachment security. Feeling emotionally and physically safe, unconditionally loved, and precious. The original birth order theorist Alfred Adler (mentioned above), died in 1937, before any studies on attachment theory were conducted. The famous Harry Harlow rhesus monkey studies, the results of which weren’t published until 1958, came after birth order theory, and there’s now a massive body of evidence that suggests that caregiver-child attachment security (or insecurity) is the single most important factor in development. So when we talk about birth order, we are drawing on a theory that may now be moot. What’s more important is parents’ attunement and emotional awareness of children’s perceptions and needs.

That’s both scary and empowering. Our children are not destined for adult lives of dysfunction based on what order they came into the world relative to their siblings – the power is in the hands of parents and caregivers. It feels like a relief to know that the assumptions about first-borns, middle child syndrome, and the babies of the family are exactly that – assumptions.

Simultaneously, we can read the same sentence with a respectful fear and reverence: the power is in the hands of the parents and caregivers. We can’t just say that it’s all up to circumstances of birth; nor should we dismiss this statement about parental power as “making everything the parents’ fault.”

We have to own that parents do have the lion’s share of the responsibility for shaping our children’s futures. Everyday, I look at my three kids and offer myself grace for having done both the right things and the wrong things. 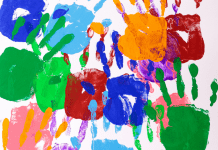 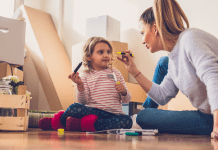