This morning, our eight-year-old crawled into our bed and asked, “What are we doing today?”

I said her grandparents were coming over to watch the Chiefs game. And in her best announcer voice, she yelled “CHIEFS!” and ran out of the room, with a fist pump for emphasis. Now, this is coming from our daughter who really could care less about sports, unless it’s gymnastics, dance, or maybe swimming. But she knows the Chiefs are a big deal in our house. Heck, the Kansas City Chiefs are a big deal in this entire city (read: the entire KC metro area)! 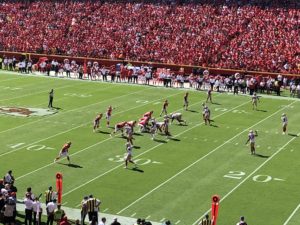 Last season, we watched with cautious optimism as our rookie quarterback, Patrick Mahomes, took the field for the first game of the season. We had seen him do amazing things as a backup during the 2017 season, and he looked awesome in pre-season games. This was what Chiefs fans needed – a ray of hope in some otherwise lackluster seasons and dismal post-seasons.

And Patrick Mahomes delivered! The enthusiasm for the Chiefs sky-rocketed, Mahomes jerseys flew off the shelves, and the city’s fountains were dyed red. The season ended with a 12-4 record, a third-consecutive AFC West title, and a playoff run that ended with a loss in overtime to the New England Patriots in the AFC Championship Game (which we will never speak of again). Patrick Mahomes became the first Chiefs player ever to be named the NFL’s Most Valuable Player. And from that moment on, Chiefs fans started counting the days until the first game of the 2019 season.

You see, last season, with Mahomes at the helm, fans had something we had lacked for years – hope. Yes, our team had fared well in the regular season for a number of years. But if and when we made it to the post-season, we were often knocked out in the first round, and it was a horrible punch to the gut every time. When we fell short in that playoff game in January, we had hope for the seasons to come. The loss stung, but we all looked forward, knowing good things were coming for the Chiefs. We had hope.

The energy around here is palpable. Chiefs apparel is in high demand. Our fountains are red again. Local statues have been adorned with Chiefs gear. Go to the grocery story during a Chiefs game, and you’ll notice two things – there are very few customers, and the game is being played over the speakers. (For the record, the only acceptable excuse for going to the grocery store during the Chiefs game is to buy more BBQ sauce). We are all huddled around a TV or radio, alone or with family and friends. We are all united as fans, no matter what side of the state line you live on. We all have hope.

In the first game of this season, we lost one of our star receivers, Tyreek Hill, to a shoulder injury, and Mahomes sprained his ankle. You could practically hear a collective gasp for a 100-mile radius. But the Chiefs won the game, and they were victorious in the second week, even without Hill. We have so much hope for the games to come! On Sundays in the fall, we come together and wear red. And in the fall, we come together and have hope. 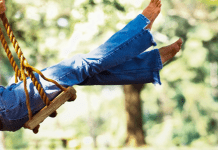 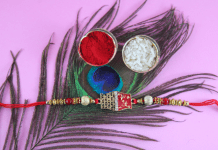 Guide to the Ethnic Enrichment Festival in Kansas City 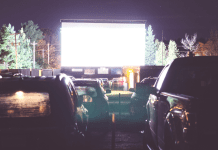