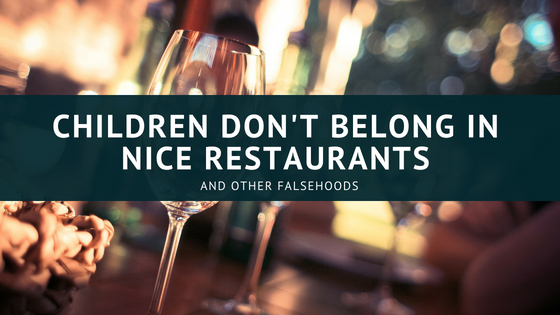 Every parent has experienced that ominous feeling. A relatively peaceful meal out with the family – a rare indulgence since having the kids – about to be disrupted by an adorable but incorrigible tiny person. The tears are about to flow, but not before letting out a blood-curdling shriek and maybe hurling a fork across the table. A full-on tantrum is looming. Or maybe a sibling fight. Or a game of crawl under the table and jump on the seats. You know it’s about to go down, and there’s very little you can do to stop it. But have you ever taken a moment to consider the real victims here — the other restaurant patrons?

OF COURSE YOU HAVE. But let’s backtrack a little. A few months ago, a story was making the rounds about a restaurant in North Carolina placing a ban on all kids under the age of five. The policy is fair enough. The restaurant owner can do what he wants with his restaurant, and there are plenty of other options for kids. But in the comments section, I noticed the consensus seemed to be that this is what we all deserve. Many felt it was brilliant and should be adopted more widely. Some parents even loved the idea. The general feeling was that adults deserve a place where they can eat out undisturbed by children. Umm, no.

To address a few of their points:

“I don’t want to listen to a screaming child while I eat.”

Guess what? Neither do I! Neither does any parent! Actually, imagine being annoyed by a screaming toddler while simultaneously dying of embarrassment, trying helplessly to control the tantrum, and starving for the increasingly cold, untouched food on your plate. I will take the kid outside if it gets too bad, but I can’t guarantee this is any more than a temporary solution. Does it look like I’m not doing anything about it? Probably, but rest assured that I am doing everything I can. This is far worse for me than it is for you, so bear with the noise a minute while I shove cold food in my face and try to get out as soon as possible. And yes, I will think twice about this decision next time. For my sake, not yours.

Oh, did you think I brought my kids here just for fun? That I thought, “You know what would make this dinner even more special? If the kids could experience the most overpriced bowl of Kraft mac and cheese while I try to keep them from coloring our white table linens.” Ha! If my kids are dining anywhere even remotely fancy (by which I mean anything classier than a Chipotle), you better believe it’s because I HAD to bring them. And it wasn’t a decision made without careful consideration and much deliberation. The idea that kids only belong in restaurants with a play place or a kids menu is absurd. Parents have a right to go to places that don’t specialize in chicken nuggets. Give us the courtesy of a little patience, and we’ll show you the courtesy of knowing when it’s time to go.

“People just need to teach their kids to behave like I taught mine from a young age.”

Well good for you, but no amount of anecdotal evidence means that any kid can just be taught from infancy to behave in restaurants, as if it’s like learning to walk. Some kids are well-behaved by nature. Others are not. Throwing tantrums and jumping out of seats are age-appropriate behavior for little kids, which is not to say that as parents we should shrug it off, but that for some children, it’s going to happen despite our best efforts.

Listen, I know that kids can be annoying and I value my peace and quiet too, but no one is entitled to freedom from disturbance in a public space. Let’s also not forget that adults can often be loud, disruptive, and obnoxious too — arguably more so than kids. And teenagers are just objectively awful in every way (ban teens?). But how about giving parents the benefit of the doubt? Assume that they’re aware of your feelings and have the same goal in mind.

Show some empathy. Or fly to North Carolina, I guess.