Earlier this week, my husband (Jon) and I had the opportunity to cross another “first” off our Kansas City bucket list when we attended our first show at the Starlight Theatre. Not only was it our first time attending a show at the Starlight, but it was also a first of another kind: opening night of “Footloose: The Musical”! (If Kenny Loggins’ voice didn’t pop into your head just now, then trust me – it will by the time you’re finished reading this post.)  We walked into the theater with few expectations other than to enjoy a (beautiful!) kid-free night in Kansas City watching a musical adaption of a popular movie from my youth … and we left with more than we bargained for!

For those unfamiliar with the story, “Footloose” tells the story of Ren, a city boy who moves with his mother to a small town where it seems that most activities young people might enjoy – including dancing – have been banned by the influential pastor of a local church. After catching the attention of the preacher’s daughter, Ariel (played by Missourian Taylor Louderman), Ren gains support from his new friends as he works to overturn the ban. In the end, competing forces come together as they realize they have more in common than they ever knew.

This show was just … fun – fun to watch, fun to listen to, fun to laugh about with those seated around us. Perhaps one of my favorite aspects of the show (aside from the soundtrack, of course) was learning that the cast was made up of a combination of accomplished actors and actresses (some having performed on Broadway) and local Kansas City performers who are part of Starlight’s Blue Star All Star Ensemble. What an honor for these young people to have such an opportunity! As we enjoyed a free backstage tour prior to the show, we got a behind-the-scenes look as several local performers waited with cast members, family, and friends for a turn on the Starlight stage.

While Jon and I took the night as an opportunity for some kid-free fun, the Starlight Theatre can definitely be considered one of Kansas City’s top family-friendly entertainment venues. As we learned prior to the performance, several of their shows each season are considered to be suitable for most all ages (as is the case with “Footloose”) and they have at least one show each season that is tailored specifically for kids (this year, the show selected for children was “The Little Mermaid”).

I am already looking forward to an opportunity to return to the Starlight Theatre! Many thanks to Karen VanAsdale, Communications Director and everyone at the Starlight Theatre for what was truly a memorable night. Speaking of memories – do you or your family have a great memory of time spent at the Starlight? We’d love to hear about them! If not – it’s never too late to create one … 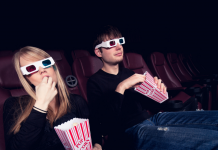 Rediscovering the Movies and Other Loves 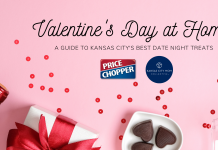