I suspected that I was older than many first-time moms when I became pregnant at 35. My suspicions were confirmed when my OB referred to my situation as Advanced Maternal Age. This condition was even more pronounced when we welcomed our second son just four weeks shy of my 40th birthday.

From the very first day of motherhood, I realized I would be a little out of step with the other mamas. I delivered both my babies at a wonderful hospital in the heart of the city and most of the other parents were much younger than my husband and me. In fact, in most cases, we were closer to the age of the grandparents than the moms and dads. 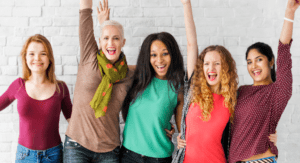 Without really meaning to, I began to find my mom community in women who were pretty different than me.  Mothers who had kids the age of mine were usually quite a bit younger. Moms who were my own age were starting to think about college searches and empty nests. When I stayed home with my littles, the women I met at the park and in mommy groups were sometimes just starting out in their adult lives and didn’t have the same kind of work and life experiences I had. I returned to the workforce after five years of staying home and found I was kind of “in between” there, too.

Sometimes being different felt kind of lonely. I could see other women finding a group of moms who were just like them, and I longed for that sense of fitting in. And then I realized that I was the lucky one who had more than a single tribe of fierce and wise women.

I’m grateful to all the women who have shared this walk of motherhood with me.

I’m grateful to my own mama and the women her age who encouraged me. These ladies answered my questions and listened to my stories and assured me that my babies were doing just what they should be.

My grandmothers were both gone before my babies came along, but I’m so thankful for the older women who were grandma to me in their places. My great Aunt Mildred and sweet friend Ada B. showered my boys and me with love and attention. At church, I found other ladies who gave me good advice and rocked my babies.

I appreciate the mamas whose last baby was the same age as my firstborn. They offered words of wisdom and provided wonderful teenage babysitters.

I learned so much from and am so grateful to those women who were ten or twelve years ahead of me on the parenting journey. Some are my age and some are just a little older. They helped me figure out which battles are worth fighting and which are not. Hygiene is a fight you need to win, they told me. Long hair isn’t.

Several of my closest friends from my single days are not moms. Not only have they cared about my boys, but they have also reminded me of the creative, competent person I was before kids. What a gift that has been to me.

My kids’ activities introduced me to a whole new group of women. We sat at speech sessions and baseball games and flag football practices together, laughing, telling stories, and trying to figure out how to be the very best moms we could be. Usually, I was the oldest, but we were all in the same boat, navigating seas that were sometimes stormy.

Oh, how grateful I am for the other mamas who are my age and who are in the same place as me! And those who started parenting with quite a bit of life experience under their belts. With these women, I can share my worries about being too old and too tired.

I’m thankful for those who showed me how to navigate the sometimes-scary life of a working mom. From them, I learned to ask for help and plan ahead. I learned that time is usually more precious than money and you could use one to get more of the other.

And here’s the crazy thing: Now I’m the mother who has some experience to share. I’m telling other women what turns out to matter and what doesn’t. Some of these women could be my daughters and others are just a little younger than I am. For them, I may be an aunt or a sister or a mother. And I’m preaching the hygiene gospel, too.