I am not an early bird. In all honestly, I’m probably not a night owl either, but instead some form of permanently exhausted pigeon, as artist Gemma Correll would say. But, dang…I would give anything to be a morning person.

Morning people just seem to levitate off their beds in the morning, whip their sheets into shape, mix their smoothies with fruits I’ve never even heard of, and run 25 miles around the block, all before 7 a.m. They are princesses. Meanwhile, I’m scrambling from the moment I pry myself away from my beautiful, warm bed (I love you, baby). I am a far cry from morning princess. I am a sleep goblin. Forget making beds and exotic fruit purees—my goal is just to remember to put a bra on before my first meeting.

Despite being in a committed relationship with sleeping in as long as possible, I am on a mission to be the bright, exuberant mom at the 8 a.m. soccer match with nary a coffee cup in sight. To speed up this process (I mean, pee-wee soccer is only a year away), I decided to rethink my morning routine to try and get me in that early bird spirit.

The One Billion Dollar Morning Routine

Let me just throw a spoiler alert at you: if this morning routine by productivity expert Jim Kwik is how you become a billionaire, sign me up for a cardboard box because no thank you. This day starts innocently enough. Instead of grabbing your phone, you’re encouraged to immediately reflect on your dreams. Kwik believes dreams are manifestations of your subconscious mind working through your life’s obstacles. That night, I had dreamed about dropping off my 28-year-old brother at a high school prom. Enlightening. Afterwards, you’re supposed to immediately make your bed. I nudged my husband and said, “Hey. This morning routine says I’m supposed to make the bed.” He grunted. I decided to revisit the issue later.

I tried to tip-toe past my toddler’s room, but Finn’s superpower is knowing when anyone else in the house is awake, so that was a non-starter. Unlike his mother, Finn already has a fulfilling morning routine: presenting his parents with a list of demands, starting with milk. Finn is on the right page, especially since next step of Kwik’s routine is to drink a glass of water. Honestly, I did feel better after hydrating, and my kid and I got to have a milk vs. water chugging contest, so that part of the routine could definitely stick around.

By then, my husband had come out to be on primary parent duty, so I finally made the bed (which took way longer than the approximated two minutes) and started in on the next part of the process, a 20-minute meditation. At minute three, Finn started blasting the “20th Century Fox Fanfare” on repeat. I don’t know if you’ve ever tried to be mindful while a brass section blares in the background, but it ain’t easy. It became clear that 20 minutes of meditation wasn’t going to happen, so I moved onto the required two minutes of exercise.

I wasn’t 100% sure what to do for two minutes, so I ended up sort of half-dancing, half-flailing around my room for a minute. Then I remembered a thing called “squats” exists and started doing that instead. Did I forget that I have an elliptical I could have used and not looked like an idiot to the neighbors? Absolutely.

The flail-squats were followed up by the absolute worst part of this whole endeavor, a cold shower. After becoming a mom, showers became my safe space. There’s nothing better than locking the bathroom door for a moment of peaceful, steamy seclusion. If cold showers were a person, I would frame them for murder so they could never emotionally damage another person ever again.

After surviving the shower, you’re supposed to follow up with tea and journaling. At this point, I really just wanted to retreat back into my bed, so I used a shortcut and filled out a prompt from The 52 Lists Project. Today’s was “What makes you feel powerful?” I could have started and ended the list at “Being right,” but instead I wrote down a few things that genuinely make me feel better about myself. And actually, it sort of worked.

Afterwards, Kwik has you write down three lists—a to-do list, to-feel list, and a to-be list. My to-dos looked like they usually do—finish a project, order groceries, attempt to clean something (anything)—but the other two lists were interesting to think about. I decided I wanted to feel in-charge, motivated, and less anxious. I wanted to be a good mom, caring partner, and helpful coworker. Those might not change very much from day-to-day, but it was nice to see them on paper.

After the lists comes 20-30 minutes of reading. I’m sure this is suggested so you will seek out books and articles that make you a better person…but I’m pretty deep into this ghost-mystery-home-renovation story, so that’s how I spent my reading time (sorry, Oprah). Or at least, that’s how I tried to spend my time, but by then Finn was barging into my room to see what I was doing. I considered it a job well-attempted, and I was finally released to have breakfast. I was on the verge of undoing all the peace-bringing the 20 (okay, 8) minutes of meditation did with pure hanger, so I grabbed my bagel and tea and went back to start my day at work.

I still desperately want to be a morning person, but does it really require this amount of energy?! I mean, I was already exhausted by 9 AM.

But look, it’s the journey, not the destination. I did pick up a few things that made me feel better about my day, namely giving myself enough time in the morning to relax, watering myself like a delicate flower, and spending a few minutes to write some intentional to-dos for my day. I learned that I don’t want to put off breakfast for two hours and some well-intentioned self care—like meditation—might not work with my current level of chaos. I’m no productivity expert, or even an intern really, but I’m on a path to a morning routine that might just work for me.

I still have high hopes I can become a morning person, but I think I should shoot for a “One Hundred Dollar Morning Routine” before ending up in the billions. With a screeching alarm and a little discipline, I think I could get there. I might not ever be the perky, non-caffeinated soccer mom hauling orange slices across the field at 7 a.m., but here’s hoping that with enough coffee…and maybe a little Bailey’s…I can at least manage a smile. 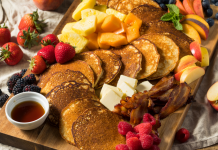 How to Make Charcuterie Boards For Kids 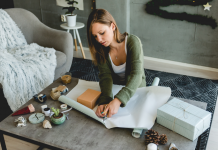 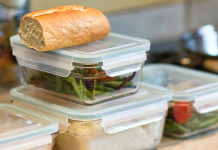 Sarah McGinnity - January 20, 2022 0
This content was paid for by the U.S. Department of Health and Human Services. Kansas City Mom Collective is proud to support the effort...