For years, I said yes to things I didn’t dig. Jobs. Volunteer opportunities. Friendships. Activities. All of it. I said yes because I thought my work, my contribution, or my presence would make someone else successful, make them happy, and help them reach a goal. But the by-product of spending time and putting effort toward things that didn’t align with my passions but that helped someone else shine? It sucked my energy. I finally got wise and started filtering my decisions using my personal mantra: “if it’s not a hell yes, then it’s a no.” 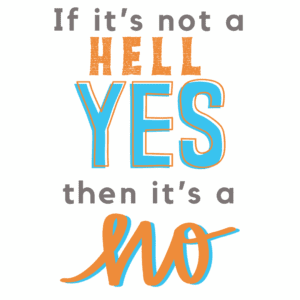 Let me be clear…

How never saying no has negatively impacted my health…

Always saying yes was taking a toll on my health in ways I didn’t even realize. It contributed to my depression (“if I don’t get out of bed, I don’t have to do that awful thing I committed to doing”). It made me grumpy. It led to migraines (“I know it’s hot as hell at that art fair, but it’s tradition that we go on the first Saturday, so I don’t want to upset tradition.”) It resulted in hearing loss (Stress + pulling giant weeds out of the yard on a very hot day = hearing loss for me, which is another story for another post). It dictated my schedule, taking me away from my peeps to do stuff I resented doing. It kept me in painful, energy-sucking friendships for way longer than I should have stayed. It bound me to low-paying jobs that I never enjoyed because I wanted to lift up the people who hired me. It sucked me into volunteer obligations that left me feeling unappreciated and used, because I believed in the cause but was blind to the people with whom I would be serving.

I finally got wise…

Saying no is a gift. Saying no is healthy. Saying no sets boundaries. Boundaries are self-care in action. (Huge plug for Dr. Henry Cloud’s book series, Boundaries.) Saying no is freedom to allow myself to focus on the things I want to spend my time and energy doing, the things that fill my soul’s gas tank. Saying no keeps me from doing things I enjoy at the time but the consequences make me feel terrible – eating too much sugar (migraine), drinking too much alcohol (migraine), attending a concert without ear plugs so I can feel non-geriatric (hearing loss), doing yard work in the middle of the day because I have time, but it’s hot as Death Valley outside with 107% humidity (migraine + maybe hearing loss).

The filter in action…

Here’s how “If It’s Not a Hell Yes, Then It’s a No” has become a filter for many decisions in my life. Take this completely fictional example:

The hardest part is saying the words…

Putting a decision through the filter and getting to no is the easy part. The hardest part of adopting this philosophy is finding the courage and grace to actually SAY NO. This takes practice, resolve, and, sometimes, thick skin. It’s hard to say no when you feel like you’re going to let people down. I have developed some language to help me honor my boundaries. It’s not rocket science, nor is it anything we haven’t all heard before…

Embracing my mantra has been one of the most freeing decisions of my life. I’m still mired in some things that give me grief on the regular, but I believe in my commitment, and before I said yes, I put them through the filter. They passed, so I said yes.

I would love to hear if you have a personal mantra!