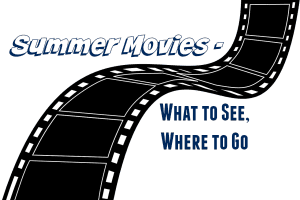 Sometimes I like to close my eyes and imagine what it’d be like when summer does come. Bees that buzz, kissable dandelion fuzz, and I’ll be doing whatever moms do in summer… a drink in my hand, my back up against the burnin’ pool chair, probably getting gorgeously tanned in summer. I finally see a summer breeze blow away a winter storm, and find out what happens to solid water when it gets warm. Imagine how much cooler I’ll be in suuuuuummmmeeeeeer!

Summer is the time for all things hot, for playing outside and for driving parents crazy because school’s out and there’s nothing to doooooooo.

Enter the cool of a dark movie theater and the blessed screen that captures the eyes, hearts and brains of mini humans. So thank me later, ladies, here’s a guide to the KC merciful nap opportunities for parents.

WHAT TO SEE
Before you take your kids to see any of these films, check out Common Sense Media’s reviews for a complete description of what to expect to determine if they are right for your child. Follow the title links below for some fun interactive sites (some have games for kids)! Here’s my top seven list of 2015 summer movies to see:

At the top of my list is this adorable new Disney film, about five of the major emotions. Much to my delight as a mental health practitioner, Disney gives up dead parents and fairy tales this summer and goes out of its way to provide a fresh angle on emotional intelligence for kids! Anger, Joy, Sadness, Disgust and Fear take on different personalities with each of the human characters.

2. DisneyNature’s Monkey Kingdom (Release: April 10)
OK so this one is already out, but I’m saving it for summer. I think Mommy may want to see this more than my kids, but they’ll love it once they see it…I think. From the creators of Bears, DisneyNature spotlights the reality of a newborn monkey and its mother, struggling to survive within a competitive social hierarchy. They’re so much like us, Mamas, it’s crazy.

3. Little Boy (Release: April 24)
Not only are there some incredible actors in this film, but it’s also a tearjerker for parents. It looks to have some mature content about parent-child separation (it’s rated PG-13), but both my 7.5 and 6 year olds want to see it. This is a story about a little boy who can move mountains with his belief, and more importantly, it’s a story about the attachment relationship between a father and his child when they are separated. Can’t. Wait.

4. Minions (Release: July 10)
The prequel to Despicable Me, this is a follow up to kids’ delight in the completely relatable and relational minions. I’m excited for the yellow BA-NA-NA silliness because I can’t wait to hear my son’s giggles next to me while we curl up in those comfy movie chairs.

5. Tomorrowland (Release: May 22)
“What if there were a place where you could actually change the world?” I want to go! While Tomorrowland is a live-action film, it’s rated PG. First of all, the screenplay was written by one of the writers of Lost (you have me), and second, we get to look at George Clooney instead of animated characters (thank you, Disney). To top it off, I’m excited that a young female main character is bursting with scientific curiosity. Positive female role models are a huge plus in my book.

6. Underdogs (Release: August 14)
‘m a little skeptical about this one’s ability to pull us for an hour and 45 minutes… but I’m willing to give it a try, considering it’s a movie about underdogs, and we love the ROYALS! The protagonist is a reluctant hero whose town is threatened when his long-time rival returns home to avenge an old grudge. When the players from his foosball table are magically brought to life, he recruits them to help him enter into the biggest underdog match ever, save the town and win back the love of his life.

7.  Home (Release: In Theaters, DVD Release: July 2015)
Home will make a great family movie night at home! Better yet, rent a projector and show it for the neighborhood on your garage door for a block party. This is a crowd-pleaser, and it’s out on DVD just in time for this summer.

1. For the 2015 new releases:
My pick is AMC Theaters at Town Center, Studio 28 in Olathe, Ward Parkway, BarryWoods in KC or Independence. There’s fresh popcorn, empty theaters, and super low ticket prices on weekday mornings. I don’t think it’s cheating that I pack a couple of gallon ziplock bags and plastic cups with tops for the kids to split up the #1 Large Popcorn and Soda. The kids can bring a blanket for cuddling. We change up which flavor of Sprite we put in our drink each time for novelty. Mommy gets to eat that deliciously fattening popcorn. too, because it’s free refills! For an extra dose of preparation, download the AMC app so you can purchase tickets ahead of time and reserve your seats before you arrive. Most AMC theaters have those awesome reclining seats – enough said.

2. For non-new releases:
Phoenix Big Cinema Summer Movie Series is will be showing special G and PG rated (non-new release) FREE films every Tuesday, Wednesday, and Thursday for the 10 weeks of summer. Showings at 10 a.m. and open to all age groups. Doors open at 9 a.m., and special kiddie meal concessions will be available.

Dickinson B&B Theatres will be repeating their Summer Vacation Movie Series at all of the big five metro locations, and they even have special showings for viewers with sensory needs (got a kid with SPD or ASD?). The Movie Series are movies from the last 2-3 years shown at 10 a.m. ONLY every Monday – Thursday for 8 weeks of the summer. Tickets are $2 each or $1 for Backstage Pass members. I’ve been told that The Lego Movie, Night at the Museum III, and many of the other past hits are on the line up!

3. Outdoor Movies
Bring a blanket and/or chairs. Arrive early enough to get a good spot. Pack fun snacks (some locations provide concessions). Bring bug spray! Glow sticks as bracelets or necklaces are a good idea. After it gets dark, you’ll want to be able to see your kids! Put the kids in their pajamas and bring something they love to cuddle with. Most of these places prohibit alcoholic beverages. For a full list of summer outdoor movies and theater options see the KCMB Summer Guide. Here are some of my favorites:

4. DIVE-In Movies
Splash around in a cool swimming pool while you watch a movie on a huge poolside screen! Check out these locations for dates in 2015: 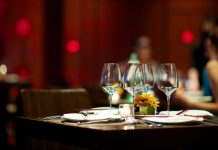 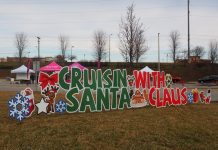 The Magic of Cruisin’ with Santa Claus: December 2020 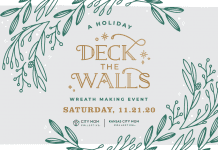 Learn to Make a Fresh Holiday Wreath This Saturday