There are certain kinds of loss that only a parent’s heart can know. As a mother, I have experienced firsthand the excruciating pain of miscarriage – when that which was only barely seen and never felt was lost without explanation. I have observed the loss of innocence in a young child – never guaranteed, but always hoped for – taken at the hands of a trusted family acquaintance. I have sat side-by-side with friends and fellow parents as they mourned the loss of a child taken too soon by an accident, illness – even murder.

Foster parents are no strangers to loss. Weaving threads of continuity and love for children, no matter how they came to be a part of your family, can be messy and painful. Working in tandem with biological parents, social workers, attorneys, therapists, daycare/school resource teams and other foster parents is hard. Rarely does everyone see eye to eye about anything other than wanting our kids to be safe, accepted and loved. Eventually, most of the children who enter our family by way of foster care will leave – whether for home or another placement.

Each move represents loss – expected or unexpected, welcomed or not.

Our first foster placement, a 7-year-old boy who lived with us for eight months, ended with 1 ½ hours’ notice after a judge decided, with no warning whatsoever and against the recommendation of most every member of his family support team, to send he and his siblings home. During those eight months, we were challenged in seemingly every possible way – but in that Jackson County courtroom on that mid-February afternoon, we found ourselves equal parts angry and relieved, saddened but mostly disappointed that his placement had ended this way. As we stood in his bedroom, hurriedly packing all of his belongings and attempting to explain to the kids why he had to leave, I couldn’t help but wonder if this frantic scene was anything similar to the one that played out when he and his siblings were removed from their home – if the trauma we were experiencing as a first-time foster family felt anything (even remotely) like his.

In the days after he left, numerous people remarked that they didn’t know how we could do it again. In short, we felt like the system had failed our family – him, and us.

Three weeks ago, we were blindsided again – this time by an email regarding our most recent placement, a sibling set of two who have lived in our home for the last five months. We were told they would be moved to a new placement with their older sibling in a matter of weeks, and without getting into the details of their case, we believed the decision to move them had been made using partial or incorrect information and that wasn’t acceptable for any of us – not as parents, or for the kids themselves. We shared our story with anyone who would listen while others spoke out on our behalf – and with just two days left before the move was scheduled to begin, we were surprised to learn it had been put on hold.

A role that I believe comes instinctively to us as parents is our role as our child’s advocate. From their earliest days, no one speaks the language of our child better than we do as parents.

When your child receives a challenging diagnosis, you are your child’s first advocate.

When your child struggles to meet developmental milestones, you are your child’s first advocate.

When your child finds that school doesn’t come as easy for him as it does for his classmates, you are your child’s first advocate.

For me, advocacy doesn’t end with the children to whom I gave birth. If our experiences over the last year have taught me anything, it’s that every child who calls our house “home” deserves to have someone in their corner – a voice until they find their own.

And what would happen to me, may I ask,
if I loved all the children I said goodbye to? 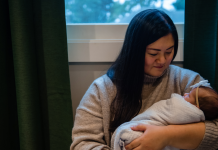