Back in the day, play used to consist of banging on neighbors’ doors and riding bikes (sans helmets) all over the neighborhood, possibly to the gas station if you were brave enough. It was yelling and screaming with stick swords in our hands and a woven dandelion bracelet around our wrist. Climbing trees. Hide and seek. Tag. Being covered in dirt from head to toe with holes in every pair of pants was a sign that you were a kid!

As my kids start to get older, it doesn’t look like that anymore. Now, it just looks… different. Not bad, just not like it did for me. 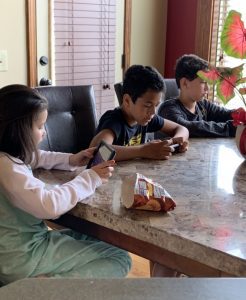 A friend comes over, and it is the same mad dash to get upstairs away from the parents. Instead of going to play Legos or make believe with dress up clothes, the kids immediately get on technology. The first few times this happened when my son was about eight, we were appalled and told him there was no reason to have a friend come over if it was just to parallel play on video games. We forced them to play outside and said no video games aloud. After our kids spent the night somewhere, it was more of the same, “What did you do at “Landon’s house?” The answer, “We played video games.”

So, I began watching and listening more closely when friends were over and what I realized was a learning experience for me. While my son and his friend played outside for a little while throwing the ball around, they were talking. I gardened and eavesdropped! The entire conversation was about a battle plan for how they were going to succeed in Fortnite.

At first, I was annoyed. Why talk about video games when you are out in this wonderful wilderness? Why couldn’t they just go climb a tree? (possibly because we don’t have large established trees…) But when I listened to them, I heard the strategy plans, reasons defending one way of thinking, and understanding when the other one didn’t agree. I heard multiple ways to approach a problem and the understanding that they had to work together to succeed. I heard organization of supplies and skills to pull off their plan. They were sharing past experiences to learn and grow from the failures they’d once had. At the same time, humbly sharing success stories that caused the other one to smile and say, “Wow that worked for you? Awesome, bro!” — It was amazing!

They eventually moved on from Fortnite to attempt another game. After several failed attempts, they realized they needed another person. Cue the little sister in the picture. For three hours, they sat at the kitchen table talking, laughing, yelling in victory, and screaming/laughing in defeat. They supported each other so they could beat the game. They paused only for snacks and restroom breaks and even then the strategy talk was in full swing! There wasn’t blaming or finger pointing when someone died; they regrouped and talked through what didn’t work so they wouldn’t do it again. My daughter even passed off her device a few times.

The ability to connect with friends through video games has really come in handy for my kids given this time of social distancing and remote learning. Because they have already been having fun with their friends through technology, keeping connected during the stay-at-home orders wasn’t quite as challenging. With colder temps quickly approaching, the skills kids are learning through this more modern style of play will definitely help us get through.

Every now and then, my “child of the 80’s” mentality kicks in, and I would rather them be out exploring and beating each other up with sticks and wood chips, but I can see the great value in what THEIR preferred method of play is. While I lived my best life tucked between a bush and an AC unit engrossed in a cutthroat game of hide and seek, I see all of the amazing connection and social emotional learning that is going on during their type of play, and I welcome it — play looks different now, and that’s okay! 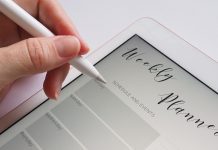 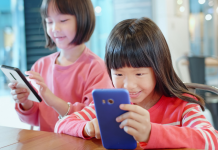 5 Reasons Not To Miss Our Event, Parenting Playbook: Get Screen Savvy 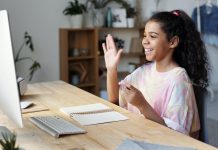