New moms usually have one or two (or 57 million) things they stress and obsess over during the last trimester and the first three months of life with a newborn. For me, my No. 1 obsession was sleep. Not necessarily how much of it I was missing out on, but rather how I 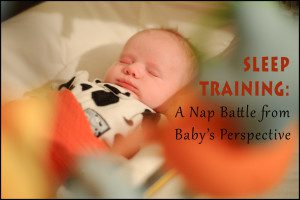 would help my baby get the sleep he needed.

I started with On Becoming Babywise, by Gary Ezzo and Robert Bucknam, despite the controversy surrounding it. The controversy didn’t bother me much once I realized two important things:

I learned a lot from Babywise. First of all, the basic Eat-Play-Sleep schedule became the framework for Oliver’s days. And secondly, I heeded the advice of putting him down to sleep while drowsy, but still awake. Not gonna lie: Oliver didn’t mind this one bit. And that made life VERY easy for me as a new mom on a quest to get my brand new baby on some semblance of a schedule. (My apologies to the other 99.9% of women out there with babies who actually cry. Don’t hate me.)

Healthy Sleep Habits, Happy Child by Marc Weissbluth was one of my other books of choice. From this one, we took away the ideas of motionless sleep and the overarching theme of respecting your baby’s need to sleep. We really took that last one to heart. I can’t tell you how many family parties were moved on account of Oliver’s nap schedule or how many invitations we passed up out of respect for his sleep needs. For us, it was worth every bit of effort. Even now, at 2.5 years old, I see the difference in Oliver’s emotional stability when we start to let the sleep priorities slip. (Not that toddlers are really known for emotional stability, but you get the point.)

The third book I consulted in my quest to know everything-there-is-to-know-about-babies-and-sleep was Secrets of the Baby Whisperer by Tracy Hogg and Melinda Blau. I spent more time on Baby Whisperer forums than I did in the actual book. I like that its authors suggest establishing a routine similar to Babywise, but that they put more emphasis on responding to the unique cues of your baby. It suggests more of a gentle approach in molding a routine: A true combination schedule (a mix between parent-led and baby-led routines).

So there I was, well-equipped with both knowledge and an incredibly easy, sleep-loving baby. I was well on my way when suddenly, at just three days shy of the 3 month mark, the 45-minute nap intruder reared its ugly head. And thus began a series of nap battles between mommy and Oliver.

Below is the play-by-play of one of the earliest (and quickest) of our many Nap Battles in the long, strategic war of 3-5-7 minute Timed Interval Sleep Training. I was intrigued by the nap-fighting strategies of my immobile, yet willful baby boy, so I spent a few minutes capturing his battle tactics on video one day.

I now present to you the first-person perspective of Commanding Officer Oliver, 3 months old, entering into battle, fully armed with an arsenal of strategies. 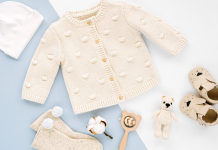 10 Baby Item Splurges for the Second Time Around 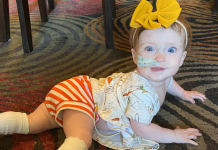 Getting a Second Opinion Saved My Daughter’s Life 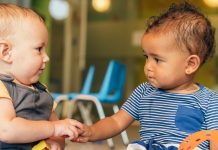