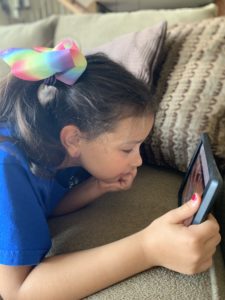 I am a child of the 80’s. I grew up watching The Smurfs, Full House, and TGIF. I learned valuable life lessons from Saved By the Bell! My husband can quote entire episodes of The Simpsons. Television watching is in our blood. That’s why we didn’t pay attention to how much our children interacted with technology until it was too late.

We never once considered putting massive restrictions on tech time because it didn’t seem to be a big deal. My kids aren’t lazy; they both are involved with sports, dance, and general backyard shenanigans! Let’s be clear: when I come home from work, my favorite thing to do is to decompress while watching some trash TV, so I get it. It’s how I unwind, so they can unwind that way, too!

Until a few months ago, I thought my kids were able to regulate technology time themselves. But then I began seeing subtle changes. Our oldest was no longer eating breakfast because he was too busy watching dumb Youtube videos. Before I even closed the garage he would ask, “Hey, can I get on the iPad?” If I said no to the iPad, he would ask to play on the PS4 or watch TV or a movie. If we were standing in line at the store, he would often grab my phone so he could play a game. Before bed, he was asking to “just finish my show.” During times where I said no technology, he would wander through the house seemingly lost, or come to one of us to be his source of entertainment. If I would ask him to get off of a device, he was compliant, but it was always followed by instant tears. Rock bottom came when I asked him to put the iPad up and he flat out yelled, “NO!” then started ugly crying, and we ended up in a tug of war for it. My sweet, loving, helpful boy flipped to this angry, dejected kid when you took his tech away.

I couldn’t believe that I had let it get this far out of control. How did I let this happen?

Well, here’s the deal. Due to the limited tech in the 80’s, I learned how to regulate myself. I had commercials. Every 10 minutes my brain had to unfocus from the show I was watching, which allowed for me to move away and possibly get distracted. I had to wait for my favorite shows to come on. They weren’t on demand. This taught me patience and anticipation. Back then, all of my shows were family shows that encouraged watching as a family. We were all together when we watched TV. It was a group activity! I wasn’t able to mindlessly watch show after show on my own because the only TV we had was in the living room, where everyone else was!

So, we’ve taken some of those 80’s family values and helped our son, and hopefully prevented our daughter, from forming the same addiction. Yes, you may decompress on technology, but only for the length of an episode of Full House. You are more than welcome to watch your favorite show on Netflix, but you will only watch one! If something happens to disrupt your technology time, think of it as a breaking news update: your show will return to you, but life moves on in the meantime.  It’s been a slow process, and we are not even close to being addiction-free. But now we can recognize the technology-dependence symptoms when they surface.

No matter where you stand on the issue of technology, make sure you are helping your child to develop their own self-regulation skills, so they will be able to realize enough is enough. 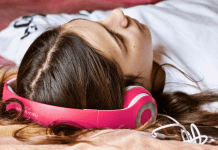 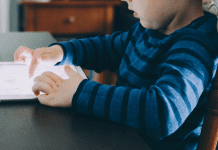 The Day the iPad Crashed 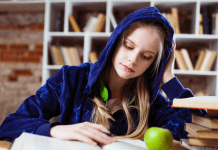 Beyond Room Parent and School Carnivals: Getting Involved in Your Teen’s School