The first time I met my husband was in 2008 during my very first day as a reporter at a TV station in Oklahoma City. I was filling up my water bottle when I felt someone drive their knee into my knees causing me to stumble. I turned around and this guy looked horrified when he saw my face, immediately apologizing and telling me he thought I was someone else. Needless to say, I was unimpressed. Love at first sight it was NOT! 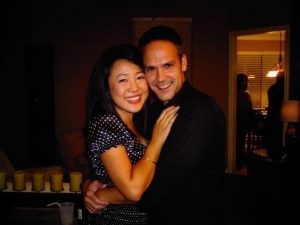 But over the course of the next few months, I got to know him better. His name was Jason Smith and he was the assistant creative services director. We had mutual friends because he was from Kansas City and I knew a lot of people in the KC area. He was really cute, thoughtful and incredibly nice. I liked him a lot. However, the week following our first date, he broke the news that he got a job back home in KC. I was disappointed. I had just gotten out of a long-distance relationship and wasn’t interested in pursuing another one. But we decided to hang out until he had to move, then see what happened. 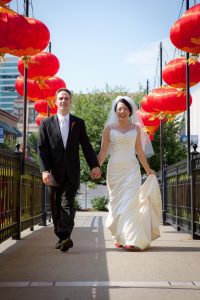 I’ve thought a lot about why our relationship works. The first three years were filled with long phone calls and video calls, and five-hour drives between KC and OKC to see each other on weekends. What made our relationship survive the distance when others did not?

I asked my husband for his perspective for this article. Here are the top three things we each believe strengthened our relationship and helped it last the long-distance, then 10 years of marriage! You’ll notice Jason’s thoughts are more philosophical (because he’s so thoughtful) and mine are more tactical and more focused on marriage after children (because that’s all my mom brain can think about right now).

Commitment is key, not distance.

When it comes to relationships, it’s about the commitment you have to the other person, not geography. Once it was apparent that we were actually going to try this long-distance thing, Jason and I were committed to each other and our relationship. So it didn’t matter that he was in KC and I was in OKC. We knew that we were each other’s person and we did what it took to be there for each other.

Jason and I have our own preferences, our own friends, and our own interests. We don’t subscribe to the idea that you have to give your absolute all to each other. We respect each other’s need to be an individual and give each other space. Does that mean we are detached… no! Like I mentioned above, we are committed to each other and our relationship. But we would not expect the other person to be completely devoted to us and have no life of their own. We think space is healthy and necessary for our relationship to be successful.

Don’t fear what you can’t control.

This was a big one when we were long-distance. A long-distance relationship must have an incredible amount of trust between both parties. I always knew I could trust Jason, even when he said he was going out with friends and those friends included women – and vice versa. But Jason’s perspective is this – if one of us were going to be unfaithful, the other person couldn’t control that, so why waste the energy fearing that it could happen. Additionally, that fear would put pressure on the relationship and potentially drive one of us away anyway. In our case, we chose to trust one another, and it has worked out for us.

Going to bed angry is OK.

I used to believe that you should never go to bed angry. But through our long-distance relationship and 10 years of marriage, I’ve discovered that sometimes it’s okay to go to bed angry. In fact, it might help diffuse the situation because you’ve both had time to sleep on it, rationalize and calm your emotions. When Jason and I argue, we don’t pressure ourselves to resolve it immediately and instead take our time working through our own emotions before we come back together to figure things out.

Task out your daily duties.

Once we had children and a bazillion things to do every day, I realized we had to be deliberate and intentional in assigning daily duties. We were getting in each other’s way when we were trying to get the kids ready for school or for bed, causing us to get irritable and snap at each other unnecessarily. So we assigned ourselves tasks – e.g. one person gets backpacks, lunches, etc. together and cooks breakfast, while the other gets the kids dressed, teeth brushed, etc. It’s worked well for us and created a better routine for our kids.

Trust your partner to parent.

This one is specifically for me, and a challenge I imagine a lot of type-A moms like myself face. Once our children were born, I assigned myself to be primary caregiver. I was breastfeeding so I was getting up with them multiple times a night. I held them when they cried. I rocked them to sleep. I refused my husband’s help saying, “I got it.” It wasn’t because I didn’t think he could parent, but rather because I needed control. Not only is that physically and mentally exhausting for me, but it’s also completely unfair to him. Jason was born to be a dad. He is more patient, more fun and a much nicer person. Yet, here I was pushing him away, giving him the impression that I didn’t trust him. My therapist told me that our children need to learn that mom and dad parent differently and adjust their actions and interactions accordingly. I’m still a work-in-progress, but I like to think I’m getting better at taking a step back and letting Jason take the lead on this parenting thing. But it really depends on the day you ask.

Of course every relationship is different so what works for us may not work for you. But after a long-distance relationship and 10 years of marriage, I like to think that we’re doing something right! 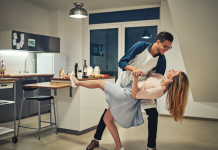 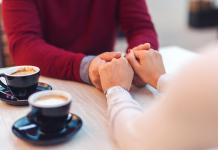 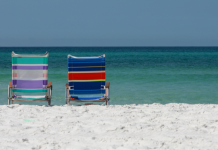