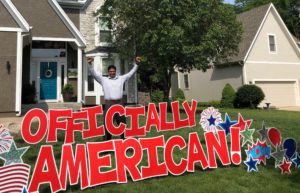 Once upon a time, I was halfway through my third year at KU, working as an RA and gearing up for another semester at the journalism school. That same month, an 18-year-old Indian guy I didn’t know traveled with his parents to Kansas City to continue pursuing his undergraduate degree. Fast forward three years later, in June 2000, when I accepted a position as a project manager at a web development company and found myself placed on team Web-o-Matic. The Indian guy was 21 by then and was, coincidentally, a developer on the same team.
A few months ago, in our eighteenth year together, Eugene, the Indian guy, was sworn in as an American citizen as I, his wife, our eight-year-old son, my parents and grandmother, beamed with pride from our seats in the packed courtroom.

Highlights from a path to US citizenship

The road to citizenship was long, expensive and not without setbacks. For Eugene, highlights of his journey included some doozies:

As his spouse, Eugene’s lack of US citizenship for all those years just felt like fact to me, nothing more. But as a non-citizen, Eugene always had a mild feeling of … fear? Dread? He once described it to me as “a constant undercurrent of fear that something will happen while we’re traveling, and I won’t be able to get back in, or worse, I will be deported.” That feeling of unease was ever-present when he was single and when we were dating, but it certainly ramped up after our son was born. It ultimately played a large part in his decision to pursue US citizenship.
I asked Eugene a few questions about his experience and these were his responses.

What led you to your decision to pursue US citizenship?

I’ve always wanted to be a US citizen. My goal was always to settle in the United States. Having lived in several southeast Asian and African countries during my childhood and adolescence, I realized that life in the US is much easier than most places in the world. I’d kept my Indian citizenship for all these years because my parents are aging and still live in India. However, given the current political climate, I ultimately decided to expedite the process to US citizenship before becoming a citizen wasn’t an option.

Were there surprises in the process?

Do you feel differently as a citizen?

Not particularly. I would say my lifestyle — from the way I speak to the crowd I hang out with — made me feel mostly American. Gaining citizenship just made it official.

Are there more steps to complete?

I am required to denounce my Indian citizenship, as India doesn’t allow for dual citizenship.

Are there implications to being a citizen that you weren’t expecting?

Not that I wasn’t expecting it, but I worry I will have difficulty getting in and out of India once I’m not an Indian passport holder. There is something called an OCI card — Overseas Citizenship of India — that should make it easier to travel. 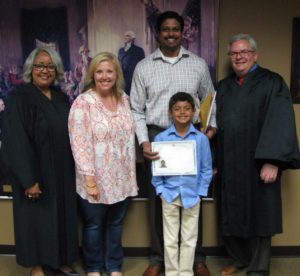 Learning together through citizenship

Celebrating Eugene’s citizenship was a great tool for us as a family to learn more about US history, civil rights and civic duty. We studied the questions together and researched the history behind the laws, decisions, and events on which the questions are based. At Eugene’s swearing-in ceremony, a woman shared her story of seeking refuge in the US after years of hiding in the jungles of Burma to escape persecution and genocide. Though I didn’t realize he was even listening, her story stayed with our son and we have since had conversations, at his level, about why parents would give their babies medicine so they would sleep and not cry in the jungle. We’ve talked about their courage and their will to survive, and we’ve tried to understand how people could grow to hate each other so much that they would burn down villages and force their neighbors to hide in the jungle for years.

The judge who presided over Eugene’s swearing-in ceremony was welcoming and kind, and the ceremony itself was so inclusive and moving. That brave woman from Burma is now a vibrant member of our local community, helping other recent immigrants find small plots of land on which to grow crops and sell them at local farmer’s markets. It is a weighty decision and an emotional journey for any foreigner to pursue American citizenship. Their stories are often filled with harrowing situations and deep sacrifice. I wish everyone could have been in that courtroom for the ceremony. We might all appreciate our liberties as Americans a little more if we understood the lengths to which immigrants are willing to go to become American citizens.