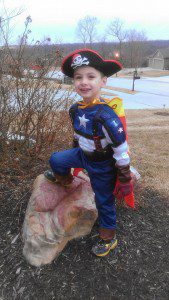 My older son, Max, loves  to hear about the moments when he and his little brother were born. He knows that he was almost perfectly quiet when he met the world, his huge green eyes taking in the new sights and sounds in the deliberate and thoughtful manner that has become his trademark. When I tell him about the day that his little brother was born, he can’t resist jumping in and finishing the story.

“He screamed and woke up the whole hospital!” Max shrieks with glee, relishing the thought of his introduction to life’s stage being so much more respectful than his little bro’s. Those who know Finn know that little has changed since that day a little over five years ago. The kid is loud. And unpredictable. And uninhibited. Finn is my wild child and, from what I can tell from my informal sociological research (aka – mom talk), the second ones usually are.

Seriously, what’s up with this? I know so many moms of a second-born-wild-child that there should be a support group to help us network more efficiently and exchange battle scars. Perhaps we can devise a secret handshake to help identify others in the not-so-exclusive group. I recently read about scientifically funded research that came to the startling conclusion that people like pizza. Wow, I bet that hypothesis was an interesting read. How strange that pizza eaters warrant focused analysis, yet wild children continue to run the globe with no plausible explanation as to why they body surf under shopping carts (Finn), dance naked to Happy  if the opportunity arises (Finn, again), and are so nocturnal that they might as well sleep upside down from the house rafters (yes, that would be my Finn). I’d love to know — what’s up with the second kid? Were we so busy running after the first one that we deprived the kid something in utero? I know that I was more relaxed during my second pregnancy, but I really don’t think treating myself to a sleeve of Thin Mints every now and then is responsible for a complete lack of inhibition in my second born. 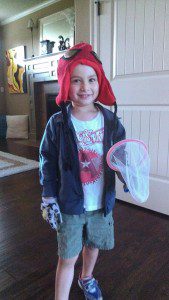 For now, I look for comfort from the other moms who have also cried in the car on the way to work after a particularly bad school drop-off and who say things like “their strong personalities will serve them well” while earmarking chapters in parenting books about strong-willed kids and suggesting that their latte be administered via IV drip. The truth is, nobody knows why the second kids tend to act like they were raised by wolves. I don’t know why, when I tell him that he makes me mad, Finn simply responds, “You  make me  mad” with a look of complete exasperation on his face. I don’t know why he dives into his best break-dancing move when it’s time to go to bed or periodically tests out his vocal chords to see their range – in the middle of Target. Finn got kicked out of the second day of his summer kindergarten program for being too disruptive and the handwritten note from his teacher simply stated “he won’t stop talking.” Welcome to my world, I thought to myself as my husband and I exchanged supportive shrugs and stared at our youngest who was simply excited that he got to sit in a different classroom all afternoon and meet new people.

Finn, like all wild children out there, both ages us and keeps us young. He’s a hilarious firecracker – a brightly-lit ball of energy that rolls through a room and leaves destruction behind. With two boys, I’m actually thankful for the differences in their personalities and can’t wait to see what life has in store for one child who would gladly spend his entire Saturday in the library and his little brother who thinks the neighborhood swimming pool should stay open until midnight. My parenting differs with each and, even at his craziest, the free-spirited nature of my second-born fills the room with an energy that I wish I could bottle up and take with me throughout my day. As for now, it’s nice to know that I’m not alone out there and I simply try to plan ahead. Those of us who have a wild child simply need to stick together; and, because there are few other viable options, learn to laugh at the chaos and fully embrace the crazy.

As for that teacher’s note, I tucked it in a safe place because, someday, I may be pulling it out to show Finn when he comes to me with his own family and wonders … what’s up with the second kid?