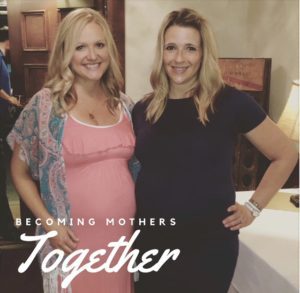 I became a mother on the exact same day as one of my closest friends!

It’s been three and a half years and I still can’t quite get over it. Honestly, it blows my mind every time I think about it.

Becoming a mother was something so beautiful and so transformative. It was no surprise to me that I was undeniably struck with a love I had never quite known before. And to get to do that with a really good friend?! Well, that was something I’ll never quite get over!

My friend, Erin, and I taught together for many years at the same school. We met when we were both single, and then both started to date guys we’d soon become engaged to. We had our wedding showers together. We got married a week apart. I mean…. Basically together.

Then… we started to discuss the idea of starting our families. We would chat at work and talk about things normal people talk about–our cycle, sex, and ovulation, right?!

The holidays came and went. Then, on my 30th birthday, I had a feeling I could be pregnant. I took a test the following day, and it was positive! As much as I wanted to keep it a secret, I couldn’t. My husband and I pretty much told everyone. We found out we would be due September 30, 2014.

A few weeks later, Erin announced that she and her husband, too, were expecting! Ahhhh it was so so exciting to share in that fun time that is FIRST TRIMESTER together. Erin’s due date was October 20th.

We were about three weeks apart!

Lucky for us, we had another close friend and colleague, Amy, who was nearing the end of her pregnancy as we got pregnant! So, she was able to give us the ins & outs of what to expect once those bundles of joy came into the world.

All I gotta say is…. Thank God for her! The three of us, together, were each other’s lifelines through many sleepless nights and early mornings.

So, just like our wedding showers that we had together, Erin and I ALSO had our BABY showers together at work. Our staff basically thought we were the same person most of the time. We’d often show up wearing the same outfit. Sometimes we planned it, but sometimes we didn’t! It was WEIRD how in sync we were with everything.

So, as the months progressed, so did our babies! We found out the genders. I was going to have a boy! Erin was going to have a girl! Three weeks apart, but I was noticeably bigger than Erin was…ha! We already decided they’d marry each other–making us in-laws. Normal people do that, right?! We’re still normal. We’re not a few shades of crazy…right?!

We’d often joke about me having my baby late & she having hers early so that we could have them on the same day. How amazing would that be?!

September 30, 2014 came and went. It was my due date, but also the KC Royals vs Oakland Athletics Wild Card Baseball game. In case you didn’t know, that day was a PRETTY big deal here in KC. You see, Kansas City hadn’t been to the World Series in 29 years. It all came down to this game.

My husband got tickets to the game because…if you know my husband…you know his LOVE for the Royals. I told him to go, but under NO circumstance is he supposed to be out all night celebrating because I could go into labor at any moment.

EVERYTHING HURT AND I WAS DYING.

Y’all, I was READY to have that baby.

But I was still pregnant for a few more days…

On October 2nd, I went to the hospital. It was time.

Erin text me that same day and said she was sitting on a yoga ball typing out my “meal train” sign up. I told her a little while later that she was welcome to come up and meet Banks if she wanted to! She immediately responded, “KELLY! We are on our way to the hospital! I think I’m in labor!”

You guys, this was so exciting for so many reasons

First, what if we had babies on the same day?

Next, oh my goodness what if we had babies on the same day?

Also, SERIOUSLY WHAT IF WE HAD OUR BABIES ON THE SAME DAY? Surely that puts us in an Ellen Degeneres category to get some sort of mommy-makeover, right?!

My husband and Erin’s husband were texting back and forth that whole day. At 9:29pm, we got the text, “Amelia Grace is here!”

Unbelievable! We were due three weeks apart, yet we had our babies on the same day! Unfortunately, we were not at the same hospital. That would’ve made this story so much better!

I’ll probably never get over that day.

The babies met a few days later for the first time. They mostly slept, but it was so fun to be able to meet each other’s baby.

To go from dance team coaches and friends to colleagues who got married a week apart and also had our first born babies on the same day.

To have someone to go through those first days, months and years with, is undeniably the biggest gift ever…well… besides the gift of motherhood.

We had so many questions about our newfound role as mothers. We mourned the sleep we thought was dead forever. We had major cry fests, emotional breakdowns, stories about letdowns and happy tears to share with each other. Our bodies changed together, they healed together, our babies grew at the same rate, we talked about development, we both nursed so we pumped at work together, we went back to work around the same time, and we cried because we missed our babies… together.

Now we momsohard together, talk about toddler tantrums together, celebrate potty training battles won, and even have more kids! Only this time, they’re a few months apart.

I specifically remember texting her with questions in the middle of the night. Sometimes the texts would (and still do sometimes) say, “can’t.” That was/is our word for… I’m overwhelmed and don’t need you to fix it, but you’re my person that I’m going to vent to because… well… you get it.

It was so comforting to know that she was doing the same thing at probably the same time.

The day I became a mother… That’s a story I’ll always love to tell. 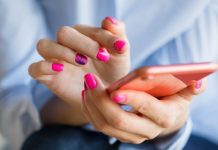