January 3rd. January 3rd, 2019 to be exact. This is the day my life would change forever, both in the best and worst ways. This was the day that I received two phone calls. The first was my sister, calling to tell me our Dad was in the hospital with what we would later find out was a stroke that would send him to a memory care facility for the rest of his life, due to short-term memory loss and Vascular Dementia. The second phone call came as I was pulling into the hospital parking lot to see my Dad. It was from a nurse telling me my blood-work came back from the lab. I was, in fact, pregnant with my first child.

So many emotions hit me at once. We were having a baby! I was going to be a Mommy, and I was over-the-moon excited to start this journey. But my Dad … He couldn’t remember what he ate for breakfast, what medications he took, what month we were in, or what his address was. There was no way he was going to be able to live by himself ever again. My sisters and I were in a panic. We had to get access to his bank accounts, move him out of his apartment, find a facility for him to live that was up to our standards for him, and also deal with the fact that we would now have a different relationship with our Dad.

With so much change, increased hormones and exhaustion, I became depressed. If I wasn’t working, I was sleeping. How could I be elated about my pregnancy, but saddened by my father’s diagnosis? These emotions were getting hard to filter through, and I found myself regretting being pregnant and wishing I didn’t have to deal with all of this. After talking with my husband, I decided that it would be best if I went to see a therapist. I needed a third-party perspective on my life and felt like they could direct me how to cope with some of my thoughts and feelings. In my sessions, there were three tools that taught me to manage this challenging time.

Separate the Events from Each Other

I learned that it was okay to be both ecstatic about being pregnant while mourning my Father’s illness. These feelings were not mutually exclusive, and there was no need to feel guilty for being happy about having a baby. My Dad would have been distraught knowing that I was losing my joy because of his ailment. I could grieve my father’s diagnosis and the future I saw for him while still enjoying my doctor’s appointments, sonogram pictures, and baby showers. I still had to live my life how I would have if my Dad wasn’t sick. A baby was coming! I had a nursery to decorate and baby clothes to buy! This truly helped me celebrate the moments of happiness I had.

I had to mourn the loss of my “expectations” of how my daughter and father would bond together. He was not going to get to teach her how to swing a softball bat or how to play the piano or babysit on the weekends. Their relationship was going to be different, but that didn’t mean that they would not get to have one. My daughter is eight months old now, and my Dad loves her more than words could explain. It’s crazy how the brain works, he literally cannot remember ANYTHING about himself, his diagnosis, or where he lives, but he knows her. He sees her and remembers her. My biggest fear was that he would never remember my daughter, but that is the first thing he asks when I go visit him. When she does get to tag along with me, he enjoys sitting her up on his knee as she smiles and laughs at him. They “talk” about how big she is, and he tells her that she is the smartest, prettiest girl he has ever seen (which is one-hundred percent true).

Asking for help was what kept me going each day. When I was having a terrible day emotionally, I would reach out to my husband, sisters, or Mom (my parents have been divorced for a few years, which is what makes my sisters and myself his care-taker now). They were my rock and support system during my pregnancy. If I needed someone to vent to, help getting prepared for the arrival of my daughter, or just to do something exciting to take my mind off life, they were there to help me. I am extremely grateful for them and the enthusiasm they brought me during this difficult time. When I had to leave work early for doctor’s appointments for myself or my Dad, my coworkers stepped in and took over for me. Without a support system around me, the first two tools were null and void. It truly does take a village, and I am so thankful for mine.

It’s bizarre how some of the best and worst moments in life coincide with each other so often. Navigating these situations can be difficult at times, but remember that having emotions are natural and expected. The ebbs and flows of life are given to help us grow as people, and a little therapy never hurt anyone, either. 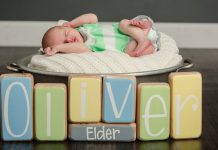 Our Road to Starting a Family 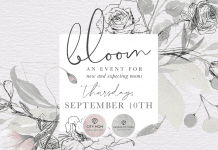 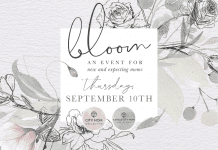 You’re Invited to Bloom 2020: Community, Inspiration and Prizes for New and Expecting Moms!