Before I had kids, I was a “fur mama.” Our dog, Scout, was the center of the universe. He slept on our bed, had a personalized toy box, and even had a first year puppy book (that’s between you and me). 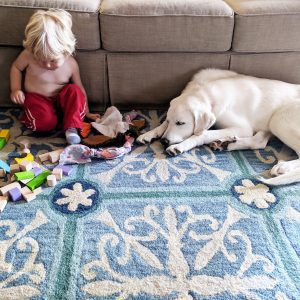 When I would see posts about someone rehoming their dog, I was appalled. How in the world could you do that? A dog is a member of your family—you made a commitment! Sigh.  That poor dog. Even after explanations from the poster, I concluded the owner wasn’t as committed to their pet as some of us, obviously.  I highly doubted that every stone had been unturned as far as resources to mediate whatever issues had been going on.

We had adopted Scout and so when he passed, we adopted again. Through a friend of a friend who rescues, we found a gorgeous mixed puppy in need of a home. We named her Millie. She was three months old and was so calm—eerily calm—and had the sweetest disposition but was obviously scared. I hadn’t given any thought to what she had experienced the first few months of her life, but figured our love and care could eradicate any underlying trust issues or behavior.

As time went on, I noticed things. A growl at one of my kid’s friends who was over to play, guarding food (also known as resource guarding), and just a general uneasiness she displayed at times that made us nervous. None of these instances were instigated. We immediately spoke with our vet and hired a trainer. 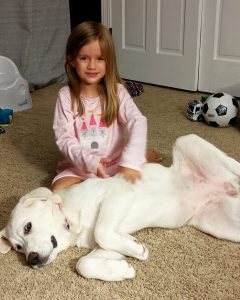 We had worked with this trainer previously with Scout and had a great relationship with her. She knew how important it was to us to work through any and all issues. We began working on training with Millie on specific things involving aggression—working with our trainer, joining various dog training groups online, watching videos, and reading articles. I figured with the amount of time we were putting in, surely this would improve after months of trying. To our disappointment, that didn’t happen.

One day, we were in the kitchen while the kids ate lunch, and Chris and I were working with her on dropping something of value and leaving it—trading it out for a high value item. We had to do this together to spot each other. It’s truly like a switch would flip. She would become a different dog, and it was scary. We looked at each other, and in that moment, we just knew. That gut-wrenching feeling was further solidified when Millie went to snap at our two-year-old son over a ball. The writing was officially on the wall.

Upset about what I knew deep down, I called our vet and trainer. Without telling either of them what my gut was telling me, they both assured me that rehoming Millie was the safest move for all of us—including her. No ifs, ands, or buts.

All of a sudden, I became that person on the Facebook post. I was the one “dumping” my dog that I had committed to. The guilt was immense. Even with reassurance from friends, professionals, and a few online pet communities, I just could not believe this was happening.

I spent months working with rescues to find her the perfect fit and home. We were not about to let her go just anywhere. After reviewing applications and a home visit, we found her forever home, one that seems like it was truly made for her—no kids in the home, acreage to run, and a dog playmate that is almost her exact age. I am in touch with her new family and get picture and video updates from time to time. It still hurts, but I know everyone is happy and most importantly, safe. I am so grateful to them for taking her in.

It was very important to me through this process that my nearly six-year-old daughter understand why we had to find Millie a new home. I do not want her growing up thinking that pets are disposable and if you are having a problem, you just find them a new place to live. We had many discussions throughout the entire process, and I hope and pray my message to her around this topic was heard and understood.

Since our experience, when I see posts about a family rehoming a dog, especially when it comes to aggression involving children, I do not judge. I empathize and feel for them. I try to give the benefit of the doubt that the majority of people do not arrive to the decision to rehome a pet lightly. My harsh judgment from years past came simply from lack of being able to empathize directly linked to lack of experience—like so many things in our world. We don’t know what we don’t know.

Now that I know, I’m here. I don’t judge you. And don’t let others judge you for doing what is in the best interest of both your family and your dog.

And most importantly, forgive yourself. 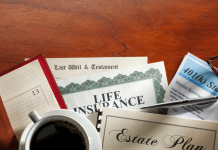